Just added to your cart

The Gardens Hotel Key West-A Room with a View

Sometimes I feel that if were not for bad luck, I would have no luck at all. But lately, it seems like I have been traveling with a lucky leprachan perched on my shoulder and a green three leaf clover tucked into my shirt pocket as I climb over the rainbow in search off my next pot o gold.

We were also participating in the Hemingway Days Caribbean Street Fair on Saturday the 25th of July with our first MargaritaShack.Com exhibition in almost five years. I had been a little over whelmed with all of the prior week's preparations & provisioning so I was eagerly anticipating a little rest and relaxation at this famous Hotel that I had heard so much about. 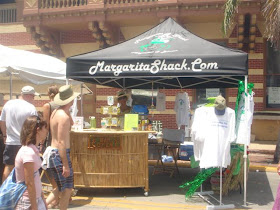 Needless to say, it was all for a very good cause because the proceeds from the Caribbean Street Fair benefit HELPLINE, which is a nonprofit organization that provides crisis intervention, information, referral services, caregiver training and telephone reassurance to the elderly residents of Monroe County.

That being said, we rolled into Key West at a little past ten o'clock on Thursday night and our keys were out front taped to one of the columns supporting the massive front porch which ran the full length of the main house.

There was a note inside the little white shiny envelope saying that there had been some changes to our itinerary and that if we didn't mind, we could stay in the Master Suite for a few days.

My wife looked at me with those all to familiar words of "what have you been up to," and I said "Happy Birthday Baby! The Master Suite is awaiting our arrival." So without further adieu, we opened the front door of the stately mansion and marched up the steps to the Master Suite.

I quickly unlocked the door and stepped aside as my wife rushed in to see what I had been up to because she knows better. As she entered the Master Suite there was the fully appointed living room to her left with a flat screen TV, sofa bed, armoire, full bath, mini fridge and refreshments.

Further ahead down the wide, wood floor, entry hall was the bank of french doors leading to an expansive veranda overlooking the gin clear pool and an enormous king size bedroom suite with her favorite ceiling fan perched above the end of the bedposts. At the foot of the bed, across the room, was a professionally appointed desk/writing table with a Bose stereo perched on the corner. Nice touch.

The massive Master Bath was solidly appointed with white marble floors, matching marble counter tops, his and her marble vanities, a private bath with toilet and bidet and a huge shower with a man sized jacuzzi tub in the far corner. 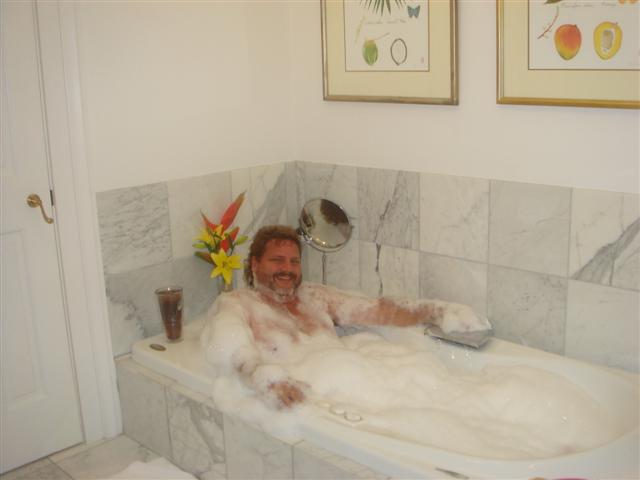 And then, there was my favorite. Right there in front of my eyes, I had to look twice to believe it, was the first dry sauna that I had ever seen in a hotel room. WOW! I could not wait to unload our assorted sundries, take a dip in the moon-lit pool and then hit the jacuzzi, sauna and shower, not necessarily in that order. 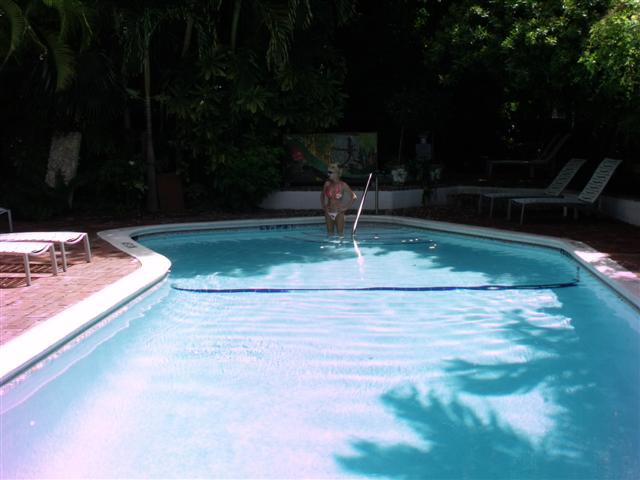 After the Midnight Spa Treatment, whatever weariness that was lingering in my old bones after the road trip from Jupiter was vanquished from my soul like the remnants of a summer rain quickly evaporating on a white hot Texas sidewalk.

Hell, I felt like a young, vibrant high school track star as I raced up and down the steep wooden stairs in my bathing suit and flip flops in the middle of the night trying not to disturb the other guests.

The next morning we awoke early and were treated to an awesome Continental breakfast on the brick porch out back of the main mansion next to the pool. The aroma from the coffee was as sensuous as the morning dew perched on the purple orchids hanging from a statuesque Spanish lime tree standing next to us. It must have been there for over 200 years. I couldn't begin to imagine the stories it could tell... 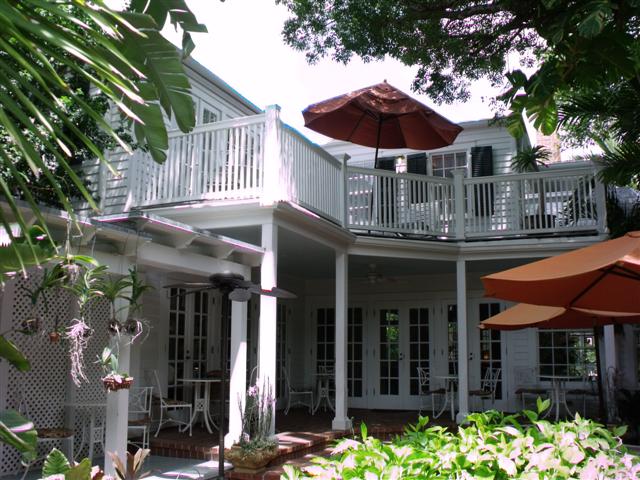 Furthermore, since real men don't eat quiche, and fish gotta swim and hearts gotta bleed they say, I had to be a "they say" rule breaker again, and have some quiche. In fact, I love good quiche and I could tell that this one was warm, fresh and moist. The English muffins were crispy and hot with melted butter and strawberry jelly and the fresh fruit was succulent. I could get very used to this I thought to myself as I downed the last drop of my freeze squeezed Florida orange juice.

A short while later, as I finished my second cup of coffee, the grounds of this infamous island oasis that sits on over an acre of prime Key West real estate in the middle of Old Town began her beckon call. It was as if I was being led out of my chair by the hand of the creator of the Gardens, Mrs. Peggy Mills. 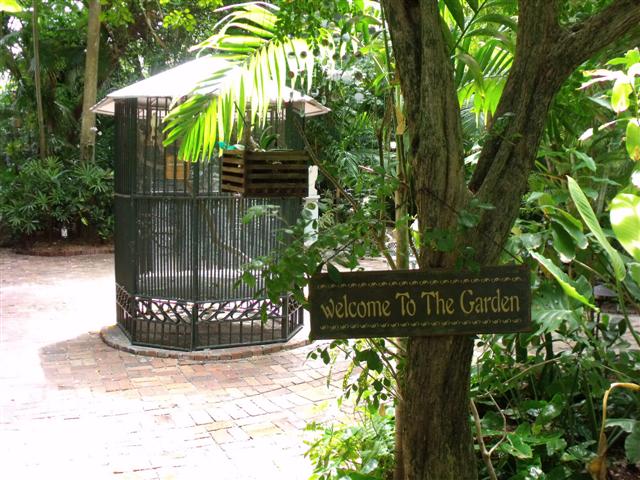 In the 1930's, Peggy Mills purchased The Gardens Mansion with a vision of creating a botanical garden that could one day be shared with the public. From that point of decision, with a clear goal in her mind, she began acquiring adjacent parcels of land and demolishing the existing structures.

She succeeded in assembling one quarter of a city block, then mostly barren after the demolition, except for the Mansion and Gate House. Her first seedlings were subsequently planted, rumored to be six coconuts, planted upside down.

From this inauspicious beginning until 1968 when The Gardens were first opened to the public she worked on her vision without exception. She imported plants from all over the world as well as over 87,000 century old bricks from Cuba, Honduras and England to line the shaded pathways of her dream. 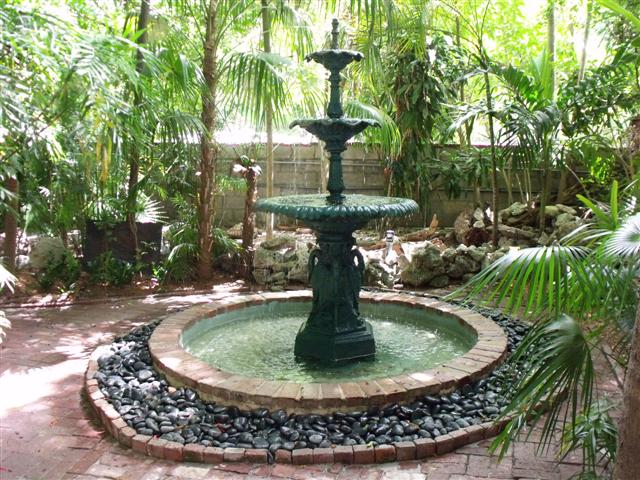 Mrs. Mills became known locally as "The Lady of the Orchids" for her rare collection of Japanese and Hawaiian orchids that still flourish in the trees even after her passing in 1979. 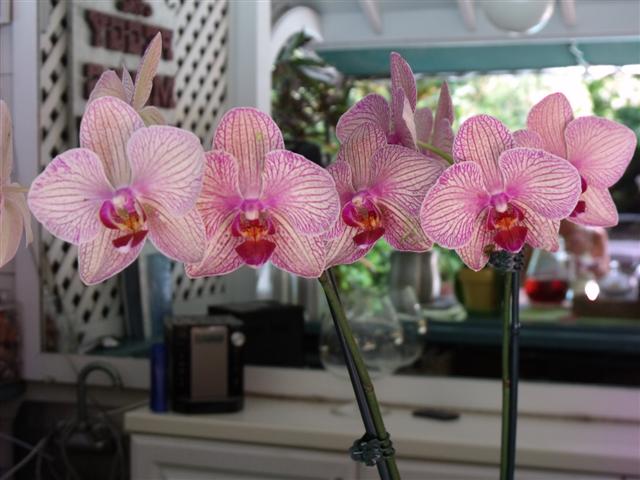 From that point on, until 1992, the keys to the Gardens Mansion was passed on to a litany of owners until Bill and Corrina Hettinger had the idea of turning her into a Key West Luxury Hotel. With an ambitious renovation of the main house and the addition of two additional Bahamian style buildings that now serve as the Garden and Courtyard accommodations, seventeen rooms, suites and cottages now make up the grounds of Key West's most famous Gardens Hotel. 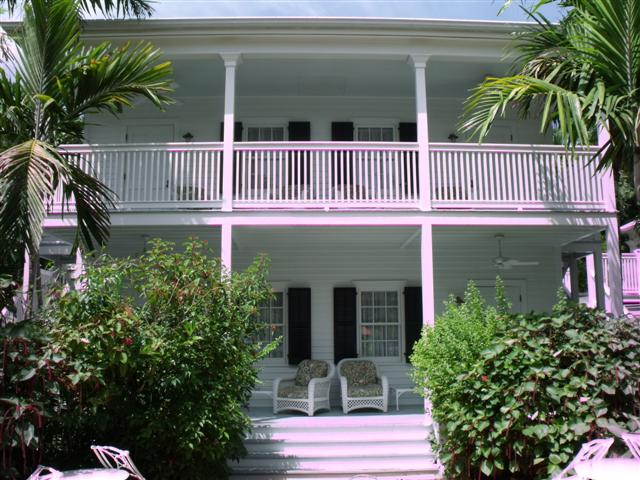 Kate Miano is now the proud owner and proprietor of this island oasis that sits within the Historic Key West estate of the Peggy Mills Botanical Gardens and is currently listed on the National Register of Historic Places for good reason.

If you appreciate history, beauty, architecture and fine living then a stay at Kate's place will be, as they say, "In a class by itself." 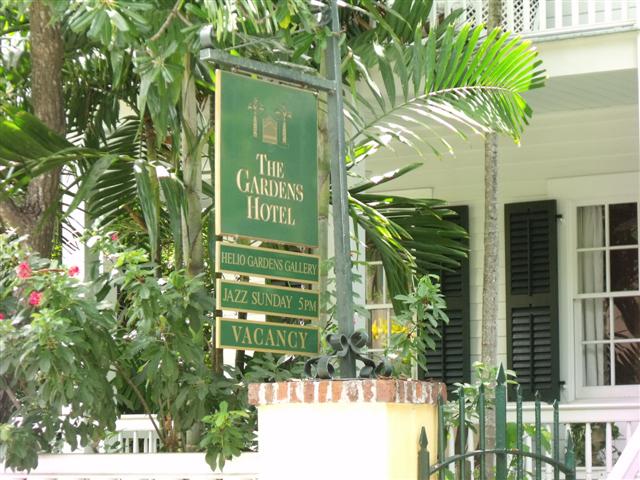